Today we docked in Southampton, England. I disembarked as early as possible so that I could get in to London for as much of the day as possible. I did the "self disembark" which basically just meant that I had to carry my bag off the ship rather than have them take it for me. Mom is staying on the boat to go back the other direction to NYC.

I took an Uber to the Southampton train station, and then I had to buy a ticket to get into London. The trains don't leave that often from the station going directly to London, and one was about to leave. I hadn't had a chance to convert any currency, so I had to take a terrible exchange rate at the station. It cost nearly $50 to get into London! Luckily, once I got on the train everything went very smoothly and I arrived in Victoria Station in London a couple hours later.

After I arrived in Victoria Station, I went straight to the hotel that I am staying at: Chester Hotel Victoria. It's not a very nice hotel (it's 2 stars), but the location is great. It was only a couple minutes walk from the station once I had gotten my bearings. I was too early to check in, so I just left my bags there so that I could go sight seeing.

I've been to London before, and I've been to most of the touristy locations. For this trip, then I decided to focus on trying to experience London more, while still going and seeing some of the touristy sites as well. Of course, one of the most Londonesque experiences is riding the Tube. We had utilized it when we were last here, but navigating it alone was a different experience for sure. Good thing they speak English here. Since I am only here for a few days, I had to be somewhat smart with what tickets I got. I figured that I would be riding it at least four times today, and that was the price cutoff for buying individual tickets vs. the day ticket. So, I grabbed a full day ticket, and headed off. I think I'll buy individual tickets tomorrow, as I'll only be here for a few hours in the morning.

First stop was the Tower of London, which isn't much of a tower... I didn't go in, but I walked around it and then went across Tower Bridge.

I continued walking along the Thames River enjoying the experience of being in London. I find it very interesting being in England because while the language is the same, and you can read all of the signs, and you can understand what all of the people (except for some of the tourists) are saying, it is a very different culture. The architecture is more European, they have funny accents, they have a longer history, and their idioms are different.

I was getting hungry at this point, and I didn't really want to spend a lot of money for lunch. Nothing right along the Thames was cheap, so I went down the main street that leads to London Bridge and found a bunch of street vendors. I saw a vendor serving fish and chips, but they only accepted cash, so I had to go find an ATM and withdraw some British Pound notes. The fish and chips were kinda crappy, to be honest, but it was filling enough, and I had fun people watching as I ate. The area I was in is a very touristy area (basically everything along the Thames between Tower Bridge and the Palace of Westminster is touristy) so there were people from all over the world walking by.

I really like St. Paul's Cathedral. For one, the architecture is magnificent, I like it better than Westminster. I think that it also holds a special spot in my heart due to the well-known WWII photograph of St. Paul's rising above the smoke of a burning London during the Blitz. The cathedral's dome and spires appear to be floating on a cloud of smoke; and it is illuminated by the light of the burning fires all around. The billows of smoke behind the cathedral serve as an eerie backdrop of the scene; and the light reflecting off of the smoke provides that iconic silhouette of the cathedral's dome. 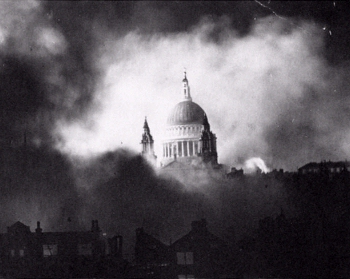 I continued walking around near St. Paul's and then hopped back on the Tube and headed back to the hotel to get ready to go to Evensong at Westminster Abbey.

Despite the fact that its main funding sources seem to be tourists buying tickets for tours, the gift shop, and the Government, Westminster Abbey is also an operating Anglican congregation. As such, they conduct services throughout the week including Choral Evensong which is what I attended. There was quite a queue outside of the Abbey of people wanting to attend the service. Most seemed to be tourists who were either interested in attending a service, or interested in getting to go inside of the Abbey when there aren't hundreds of other tourists. I was primarily there for the first, but the lack of irreverent tourists was nice.

I'm sure some were also there to try and grab a picture inside the Abbey while there weren't that many people around, but photos are prohibited for people attending the service (which is a good thing in my book). That's the funny thing about vacation pictures: taking pictures of static things like monuments and buildings is fairly pointless (not saying that I'm not guilty of this). I think it's especially true in places that don't change with the time of the day (inside) or places where taking pictures is not exactly respectful (a cathedral, for example). I mean, if you think about it, iconic locales have had many professional photographers take photos of the exact same thing that you are trying to take a picture of. The difference is that they are actually good at taking photos and are using a camera that isn't total garbage like whatever you are using. Stop. Grab, like, one picture so that you can remember you were there and then use Google to find good pictures of it.

The Evensong service consisted of choral music, prayers, Scripture readings, corporate recitation of the Apostle's Creed, and other liturgy. I appreciated that the Apostle's Creed and the Lord's Prayer were recited during the service; I don't think I've ever been in a service where the Lord's Prayer was recited corporately as part of the planned service, and I definitely haven't been in one where the Apostle's Creed was recited so having those as part of the service was a new experience. I think that more traditional, Evangelical churches should corporately affirm these core Christian texts through recitation.

After I exited the Abbey, I got this picture of it from the outside with the light of the evening sun illuminating its façade beautifully. (See, there I go being a hypocrite and taking pictures that other people have probably taken more competently than myself.)

It has been a full day of travel, sightseeing, and experiencing so I am going to go to bed.

Your ML model and AI-as-a-service apps might open new attack surfaces. Here's how to mitigate t…

My plans at FOSDEM: SourceHut, Hare, and Helios

FOSDEM is right around the corner, and finally in person after long years of dealing with COVID. I’l…

Hi all! This month’s status update will be lighter than usual: I’ve been on leave for a while at the …